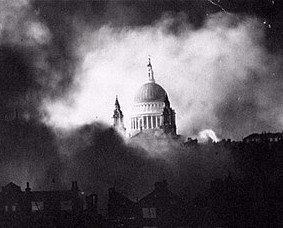 The children, the old man and Holly the dog, waved happily to the boy’s parents as they ran down the garden path towards Mini purring by the roadside, impatient to be off.

“Is Innis coming with us today?” asked the boy’s great grandfather.

“No”answered Hector “ she said she would see us later.”

They were all inside the car when a wasp settled onto the histo panel.

Hector swatted the insect squashing it with his toy plane he was holding, thus preventing anyone from being stung.

This action set the numbers rolling, followed by lights flashing and the all too familiar sound, the dials stopping at 1940. December the 29th. Everything was pitch black.

“Oh dear!”exclaimed the boy’s great grand father “it seems we have landed in the worst night of the blitz of London, World War 2.

“All windows of buildings have to have black curtains to cut out any light that could alert pilots from enemy planes where to drop their bombs. If they see no lights they in their minds, could be flying over open countryside.”

Not a chink of light could be seen, total black out. Then there came an ear splitting, horrible, wailing sound.“Thats the alarm siren, signalling for everyone to run and take cover immediately. People must run to their nearest air-raid shelter. Coventry bombed heavily two weeks ago London badly tonight.” exclaimed Gramps.

Hurrying people were scurrying down into the tube station, running from the immediate danger of enemy planes about to discharge their lethal load over London.

Incendiary bombs first, which were exploding torches of ferocious fire, lighting up and burning the city of London.

“Where shall we go?” asked Hector fighting to be heard over the dismal drone from the engines of the planes above; like a sea of angry buzzing wasps followed by the thud of the first wave of over a hundred thousand bombs dropping over the city that night “We are fine here, don’t

Strong giant search lights pinpointed the planes from the ground, British guns trying desperately to reach and destroy them.

“Oh look, it looks as if St Paul’s Cathedral, Christopher Wren’s wonderful church is alight,” exclaimed Felix, “we must do something!”

Holly the dog, leaped out of the car, despite the burning of the buildings all around , raced into the church up and up she ran until she reached the wooden supports that held the copper roof. With her sturdy body she bravely shoved with all her weight jabbing the burning incendiary torch pushing it sideways, miraculously it slid to the side, falling into the street below where it was extinguished, by a fireman. Later the water from the hydrants ran out of water, other fires in London were left to burn themselves out.

Without being seen, Holly scampered back to the car, her black fur was singed a little, but other than that she was fine.

“Well done Holly” are you ok I expect you need a drink,” said Gramps.

Holly was very hot and dusty and very proud of herself.

“Listen”, said Hector the planes are over us again.” Hector was right. The fist wave of planes was followed every two minutes, by wave upon wave of enemy planes dropping explosives, deafening bombs attacking the buildings around Saint Pauls Cathedral. One square mile of the city would be destroyed.

For hours, London was bombed and burned. The sound of ferocious walls of hungry flames devouring all in their path, and again and again the din of bombs striking their target, the crash of collapsing buildings  was all around them, the very ground shook, they were afraid, but knew in Mini they were safe.The all clear siren at last sounded, and Holly started howling. Gramps reassured Holly all was now well, she was hearing the horrible ear piercing high and low, up and down, wailing pitch, of the all clear signal.

It was now getting light. They saw with horror and dismay, mounds of bricks, masonry, twisted metal and chard wood; once fine buildings, in a fine street, now reduced to piles of rubble.

They viewed this terrible scene, of devastation through Mini’s windows.

“Come on boys” said Gramps “let’s see if we can help.”

Gramps and the boys and Holly, jumped from the car.

The air was thick with dust stinging their eyes, the stench and sight of ruination and desolation assailed them.

Holly was immediately alerted by a faint sound, she frantically began clawing at the rubble with her paws, the boys and Gramps joined her, with their bare hands they pulled bricks and debris away, discovering a crying child who had been trapped for a considerable time.

“Quickly” ordered Gramps, “ help me lift her away, and into Mini.

The mini had turned itself into an ambulance.

They found themselves racing towards the nearest hospital, where doctors and nurses were waiting for them.

The family worked all day long, with many others also with only their bare hands, helping to dig people out of their ruined homes.

At last Gramps said they had done enough, and to leave the work to the professionals.

And there she was, their friendly car waiting for them, they thankfully leaped inside.

“Go go Mini go” they chanted and off they went to join Innis for tea.

They found her in the garden waiting for them.

They told her how accidentally they had landed in World war 2 the night of the worst bombing in London in December 1940 The Blitz, called the second fire of London.

“It must have been very frightening” said Innis. “Holly howled when the all clear sounded, the noise of the siren was horrible, she didn’t understand at first, that all was then safe,” laughed Felix.

“ You were all amazing, I’m very proud of you, we saved many trapped people and Holly saving St Paul’s, this was a miraculous achievement.

You know, we were at war for four years, for many months we stood alone against one of the most evil men in history;

Adolf Hitler. With the help of America, The British Empire and The Common Wealth in the end, we won the war against Germany, who of course are now our friends too, “ stated Gramps drawing a deep breath.

Well, must be going, have things to do, see you soon.”

With a grin and wave of his hand, their great grand father, sprang into the mini and was gone.

The war was started by Germany, in 1939 an unprovoked attach on Poland. Sweeping into Czechoslovakia, Finland Belgium Austria Denmark Norway, Netherlands France and invaded The British Channel Isles.

The war in Europe was won with the sacking and bombing of Berlin the capital city of Germany. Germany surrender in 1945 The Russians, were the first of the allies to enter the city.

Adolf Hitler shot and killed himself in his bunker in Berlin.

The war finished in The Pacific in 1945

The Japanese bombed Pearl Harbour in Hawaii owned by the USA in 1941 bringing the USA into the war.

Hawaii became the fiftieth State of the USA in 1959.

32 000 were killed in total during the London Blitz