For Ray and Sandy Naqvi celebrating St Eric’s day May 2012
Saint Eric
A glimmer of light we see;
Through the hazy mists of ages.
‘tis from Saint Eric’s golden crown,
From the Middle Ages.
King of Sweden from 11 55
Slain on May 18th, reigned for years five.
Where his head, which was severed,
Struck the ground; a glorious fountain was found.
Known as the law giver for his realm.
And Christianity he upheld,
A crusade into Finland he led, not to take,
He felt the infidel Finnish souls were at stake.
A believer in the military,
Upholder of the law,
A fearless Christian
He had no flaw.
Friends, when we see Saint Eric’s face,
On Stockholm’s City coat of arms
Does he remind us of someone near?
Someone here, who for us is very dear. 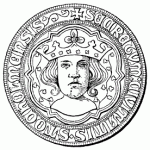